Wifredo Lam: disturbing the dreams of the exploiters

Cuban whose art was influenced both by Catholic and African traditions. 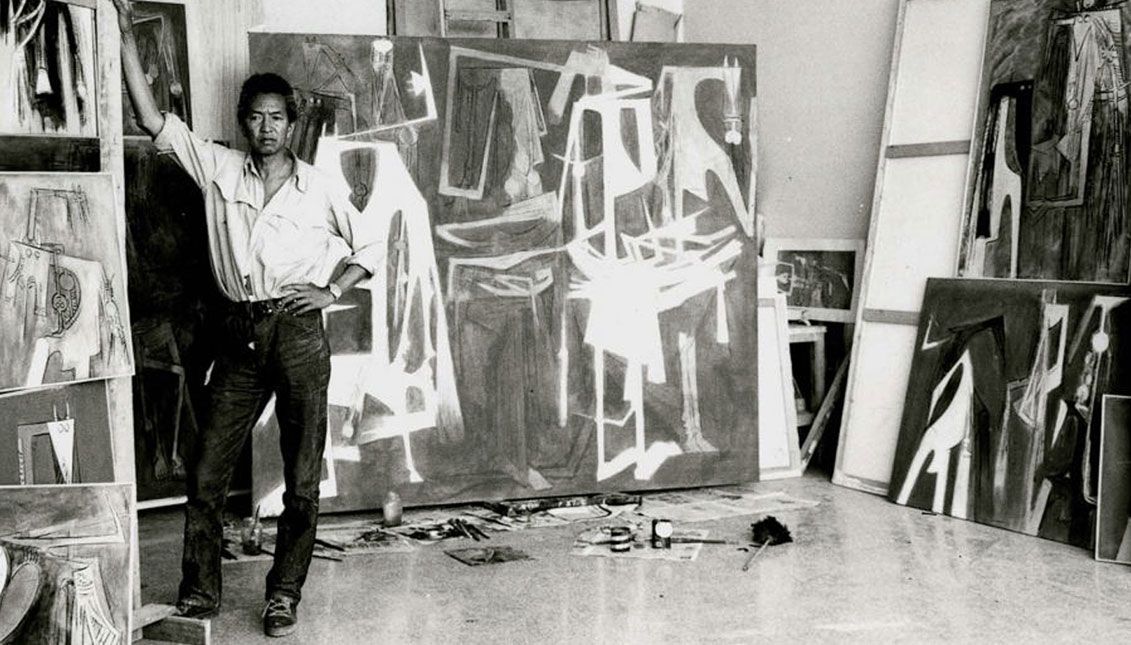 Wifredo Lam, born December 8, 1902, was the son of a Cuban, Chinese immigrant father, and a Congolese formerly enslaved mother. Growing up in the sugar farming village of Sagua la Grande in Cuba, his early art was influenced both by Catholic as well as African traditions and imbued with spiritual practices that he learned from his godmother, Matonica Wilson, a Santería priestess and locally-celebrated healer and sorceress.

Over the years he was to travel far, and, at each junction, his Afro-Cuban fusion remained the undertone of his evolving artistic practice.

Lam went on to study in Madrid where he was influenced by Salvidor Dalì. He travelled around the Spanish countryside and closely identified with Spanish peasants, whose troubles reminded him of the former enslaved people he grew up around in Cuba. During the Spanish Civil War, he turned to producing Republican propaganda posters and was eventually drafted to defend Madrid.

In 1938, he moved to Paris, and it was there he met Picasso, who introduced him to many of the leading artists of the time. In a fascinating study, Michele Greet describes how prominent members of the Parisian avant-garde developed a fascination with Lam, not only with his work, but more specifically with how they perceived race to have shaped his art.

Two people in particular took an avid interest in Lam – Picasso and André Breton -each mythologising him in order to validate their own perceptions of non-western cultures. In his trip to Mexico in the same year, Lam stayed with Frida Kahlo and Diego Rivera, and through their influences further broadened his artistic practice.

In 1940 he collaborated with the Romanian artist Victor Brauner to create Marianne. According to Dr. Adina Kamien, Senior Curator of Modern Art at The Israel Museum, Jerusalem, the collage’s dark tones illustrated the accumulation of gunpowder by the Maquis, the French guerilla resistance fighters of World War II.

Marianne is currently on display at the Israel Museum in the exhibition Picasso to Kentridge: Modern Masterpieces on Paper and described by Kamien:

Victor Brauner and Wilfredo Lam actively explored the realm of dreams and the unconscious, and thrived on the occult and the mystical. The content and style of Brauner’s art reflects a fertile fusion of wide-ranging world cultures, mythologies, and religious beliefs from Egyptian to Aztec, Native American to Oceanic, and Jewish to Hindu. Marianne is a collaborative work, created while Lam and Brauner took refuge in the South of France from the Nazi invasion. The work is prophetic in its content, as it deals with a French resistance a year before it was initiated.

Many artists were to influence Lam over the years, but, on his return to Havana in 1941, he developed a new awareness of Afro-Cuban traditions and a concern for the oppressed enslaved and the Afro-Cuban culture who he felt had been degraded and their culture prettified for the sake of tourism. Lamenting Cuba’s African lost heritage in an interview with Max-Pol Fouchet, he said:

I wanted with all my heart to paint the drama of my country, but by thoroughly expressing the negro spirit, the beauty of the plastic art of the blacks. In this way, I could act as a Trojan horse that would spew forth hallucinating figures with the power to surprise, to disturb the dreams of the exploiters.

He settled in Havana in 1941 where he turned to paint the drama of his country in his unique style, now matured in a fusion of human, animal, and vegetable elements into his unique hybrid figures.

Vivid examples of this period can be found in the works from the Israel Museum collection including a gouache on paper, Horse Woman (c.1942), and his oil on canvas Composition (Composizione) (1967). Perhaps his most iconic work is The Jungle, painted in 1943, and purchased by the Museum of Modern Art in New York. It is often compared to Picasso’s Guernica.

The exhibition Picasso to Kentridge: Modern Masterpieces on Paper, which draws on the Israel Museum’s rich holdings, is on display in Jerusalem until the end of 2021 in advance of its planned presentation at the Pushkin State Museum of Fine Arts, Moscow, in 2022.