The Spanish Government declares a State of Alarm

The Council of Ministers, in its extraordinary session yesterday, approved through a Royal Decree the declaration of an initial state of alarm of 15 days, which can be extended to 6 months when the Government makes the request to Parliament next Tuesday, in order to respond to the situation of special risk caused by the COVID-19 virus. 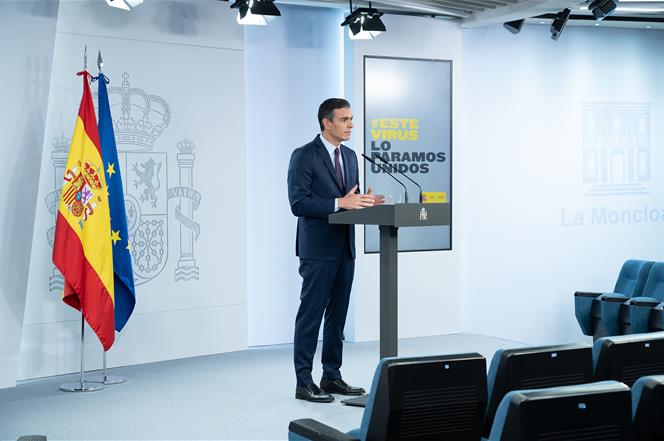 The six-month period is considered necessary, based on scientific criteria and expert recommendations, to begin to overcome both the current second wave of the pandemic and its most damaging stage.

The State of Alarm is the legal provision that allows restrictions on mobility and contacts so that the Autonomous Communities that consider it necessary can apply it with complete constitutional coverage.

A general ban on night-time mobility is established between 11pm and 6am, with each Autonomous Community being able to modulate its start between 10pm and midnight and its end between 5am and 7am. Its application will be for the whole country except for the Autonomous Community of the Canary Islands, due to its better epidemiological situation.

During this period, circulation will only be possible for legitimate reasons such as the purchase of medicines, fulfilment of work obligations, care of adults or minors and return to the home.

The Autonomous Communities will base their actions on the indicators and criteria agreed last Thursday by the Interterritorial Health Council, relating to the number of infections, care and public health capacity and also the characteristics and vulnerability of the population.

According to these criteria, four risk levels are established for each territory: low, medium, high or extreme.

The Inter-Territorial Council of the National Health System will meet every week, so that its members, i.e. the Minister of Health, Salvador Illa, and all the health advisors of each Community assess the situation on a weekly basis and establish a coordinated health response.

As has been the case to date, the Minister of Health will also appear every two weeks before the Congress of Deputies to give an account of the epidemiological situation in our country and the measures being implemented to curb the pandemic.

The Autonomous Communities have at their disposal 16,000 million euros from the Non-Reimbursable Fund established by the Government to help them combat the effects of the pandemic, finance the increase in health and education expenditure, compensate for the fall in income and lay the foundations for economic and social recovery.