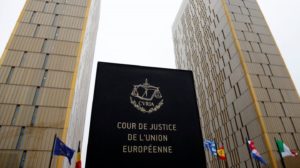 By virtue of Article 228 TFEU, the European Parliament, by decision of 18 December 2019, reelected Ms Emily O’Reilly, who has Irish nationality, to the post of European Ombudsman for a mandate of five years until the end of the parliamentary term.

A formal sitting was held yesterday, at 12:00, at the Court of Justice of the European Union, during which the new Members of the Court of Auditors and the European Ombudsman, on the occasion of the renewal of her mandate, gave their solemn undertaking.