The European Commission has fined AB InBev €200 409 000 for breaching EU antitrust rules. AB InBev, the world’s biggest beer company, has abused its dominant position on the Belgian beer market by hindering cheaper imports of its Jupiler beer from the Netherlands into Belgium. 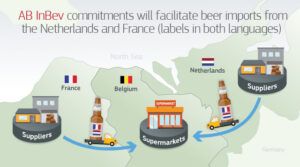 Anheuser-Busch InBev NV/SA (AB InBev) is the world’s biggest beer brewer. Its most popular beer brand in Belgium is Jupiler, which represents approximately 40% of the total Belgian beer market in terms of sales volume. AB InBev also sells Jupiler beer in other EU Member States, including the Netherlands and France. In the Netherlands, AB InBev sells Jupiler to retailers and wholesalers at lower prices than in Belgium due to increased competition.

In June 2016, the Commission opened an antitrust investigation to assess whether AB InBev abused its dominant position on the Belgian beer market by hindering imports of its beer from neighbouring countries, in breach of EU antitrust rules. In November 2017, the Commission issued a Statement of Objections.

This decision concludes that AB InBev is dominant on the Belgian beer market. This is based on its constantly high market share, its ability to increase prices independently from other beer manufacturers, the existence of barriers to significant entry and expansion, and the limited countervailing buyer power of retailers given the essential nature of some beer brands sold by AB InBev.

AB InBev abused its dominant market position in Belgium by pursuing a deliberate strategy to restrict the possibility for supermarkets and wholesalers to buy Jupiler beer at lower prices in the Netherlands and to import it into Belgium. The overall objective of this strategy was to maintain higher prices in Belgium by limiting imports of less expensive Jupiler beer products from the Netherlands..

Through market monitoring the Commission identified ex-officio restrictions for the imports of consumer goods into Belgium from neighbouring Member States. On 30 June 2016, the Commission opened an antitrust procedure to assess whether AB InBev was abusing its dominant position in the Belgian wholesale beer market to illegally restrict imports of cheaper beer into Belgium. On 30 November 2017, the Commission adopted a Statement of Objections alleging that AB InBev engaged in restrictive practices constituting an abuse of dominance under EU antitrust rules.

Article 102 of the Treaty on the Functioning of the European Union (TFEU) prohibits the abuse of a dominant position, which may affect trade and prevent or restrict competition.