The Withdrawal Agreement was approved by the European Parliament on Wednesday evening by 621 votes in favour, 49 against and 13 abstentions. 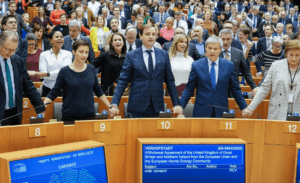 In a debate with the Croatian State Secretary for European Affairs Nikolina Brnjac on behalf of the Presidency of the Council, Commission President Ursula von der Leyen, and the EU’s Chief Negotiator Michel Barnier, Parliament took stock of the withdrawal process so far and the challenges ahead.

Commenting on the historic importance of the vote, most speakers on behalf of the political groups highlighted that the UK’s withdrawal will not be the end of the road for the EU-UK relationship and that the ties that bind the peoples of Europe are strong and will remain in place. They also mentioned that there are lessons to be learnt from Brexit that should shape the future of the EU and thanked the UK and its MEPs for their contribution throughout the UK’s membership. Many speakers warned that the negotiations on the future relationship between the EU and the UK are going to be difficult, especially taking into account the timeframe provided in the Withdrawal Agreement.

Parliament will have its say on future relationship with UK

Parliament’s UK coordination group, led by Foreign Affairs Committee Chair David McAllister (EPP, DE), will liaise with the EU Task Force for Relations with the United Kingdom and coordinate with the Foreign Affairs Committee and International Trade Committee and all other competent committees. The EP will follow closely the work of the EU negotiator Michel Barnier and continue to influence the negotiations through resolutions. The final agreement will need the approval of the Parliament as a whole.

After the historic vote, President Sassoli said that: ““It deeply saddens me to think that we have come to this point. Fifty years of integration cannot easily be dissolved. We will all have to work hard to build a new relationship, always focusing on the interests and protection of citizens’ rights. It will not be simple. There will be difficult situations that will test our future relationship. We knew this from the start of Brexit. I am sure, however, that we will be able to overcome any differences and always find common ground”.

To enter into force, the Withdrawal Agreement will now be put to a final vote by qualified majority in the Council.

The transition period starting on 1 February is set to expire at the end of December 2020. Any agreement on the future EU-UK relationship will have to be fully concluded before that point if it is to come into force on 1 January 2021.

The transition period can be extended once for one to two years, but the decision to do so must be taken by the EU-UK Joint Committee before 1 July.

Parliament will have to approve any future relationship agreement. If such an agreement refers to competences that the EU shares with member states, then national parliaments will also need to ratify it.

The vote in Parliament’s plenary session took place after the completion of the ratification process in the UK and the positive recommendation by the Constitutional Affairs Committee. Part Two of the Withdrawal Agreement protects EU citizens in the UK and UK citizens in other EU countries, as well as their families. According to its provisions, all social security rights under EU law will be maintained and citizens’ rights will be guaranteed throughout their lifetime, and relevant administrative procedures have to be transparent, smooth and streamlined. The implementation and application of these terms will be overseen by an independent authority, which will have powers equivalent to those of the European Commission.