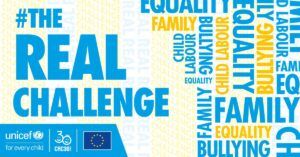 The UN Convention on the Rights of the Child turns 30 this year but we are not throwing a party just yet. Even though, it has come a long way since its inception, children’s rights are still being violated on a daily basis.

UNICEF and the EU have decided to join forces this year and launch #TheRealChallenge campaign. Because we want kids and adolescents to express their views on their own rights and in their own language, we will be reaching them where they are on:

The Convention on the Rights of the Child remains the most ratified UN Treaty and has played a vital role in improving the lives of children all over the world. At the high level event at the United Nations General Assembly in September, UNICEF’s Executive Director Henrietta Fore and the EU High Representative and Vice-President Federica Mogherini were interviewed by children and young people on the progress made for children’s rights over the past 30 years, about the new challenges that children are facing today and will be facing in years to come, and about concrete commitments to continue to promote, protect and fulfil the rights of children around the globe.

The campaign will be activated on 25th October and will run at least until 20 November, which is the anniversary of the Convention. The videos will have an emotional and personal style and convey the message that children’s rights are universal, yet they cannot be taken for granted.

Real challenges for children across the planet continue and we need to raise awareness that these are indeed real and unacceptable: children are refugees, children are being recruited as soldiers, inequalities persist in many forms, children are at risk of child labour, they are victims of bullying, online and offline; and children are being torn apart from their families against their will and best interest and are losing their homes.

You want to join?

Look out for #TheRealChallenge soon on TikTok!