European Commission President Ursula von der Leyen today pledged that the European Commission will drive a sustainable and transformational recovery that will give Europe a global platform to lead economically, environmentally and geopolitically. 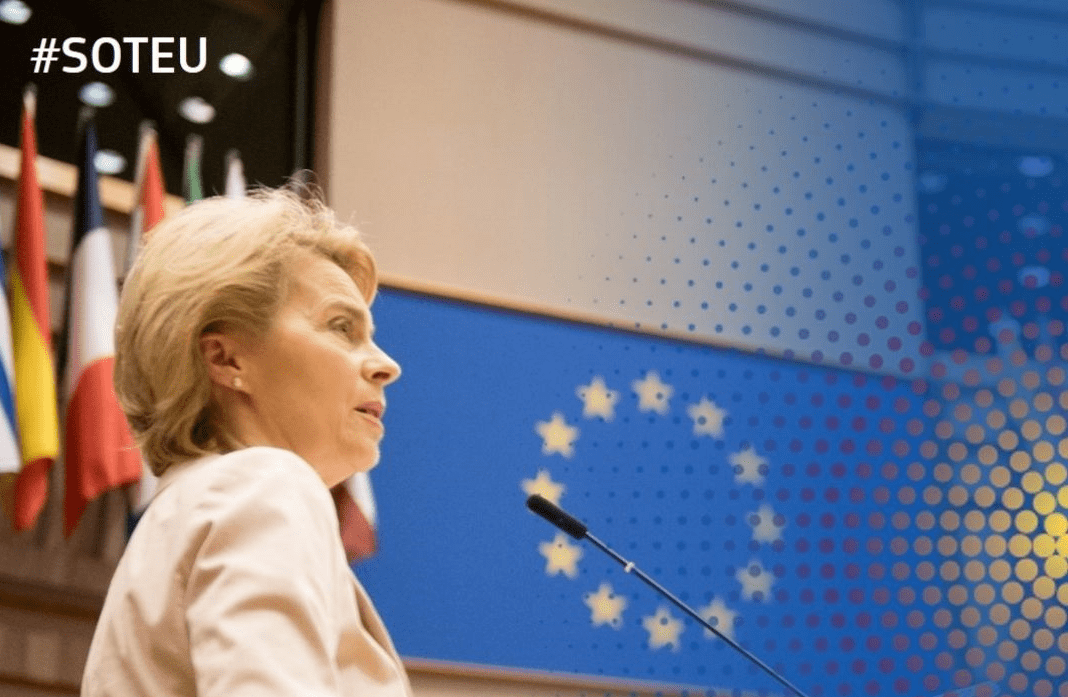 MAIN HIGHLIGHTS of the State of the Union 2020

The President called for lessons to be learned, saying Europe must build a stronger European health union, with a future-proof and properly funded EU4Health programme, a reinforced European Medicines Agency (EMA) and a strengthened European Centre for Disease Prevention and Control (ECDC).

She pledged to build a European BARDA – agency for biomedical advanced research and development – to enhance Europe’s capacity to respond to cross-border threats. The President called for a debate on new competences for the EU in the field of health, as part of the forthcoming Conference on the Future of Europe.

An EU that protects

President von der Leyen stressed the importance of reinforcing Europe’s social market economy and of protecting workers and businesses from external shocks. She promised to put forward a legal framework for setting minimum wages, emphasising that “minimum wages work – and it is time work paid”.

The President pledged action to boost the single market, reinforce the Economic and Social Union, get the Schengen area working in full again, update the EU’s industry strategy and adapt its competition framework.

European Green Deal – reducing emissions by at least 55% by 2030

The President revealed that the European Commission is proposing to increase the 2030 target for emissions reduction from 40% to at least 55%. This will put the EU on track for climate neutrality by 2050 and for meeting its Paris Agreement obligations. The Carbon Border Adjustment mechanism will help ensure others will follow Europe’s lead.

By next summer the Commission will revise all of the EU’s climate and energy legislation to make it ‘fit for 55′.

The President further announced that 30% of the €750 billion #NextGenerationEU budget will be raised through green bonds. And 37% funding will be invested in European Green Deal objectives, including ‘lighthouse’ European projects – hydrogen, green building and 1 million electric charging points.

She called for a new ‘European Bauhaus’ as a co-creation platform for architects, engineers and designers, to launch the architectural style of our times, reflecting our aspirations to make Europe the first climate neutral continent.

President von der Leyen stressed that “Europe must now lead the way on digital – or it will have to follow the way of others.” She called for a common plan for digital Europe with clearly defined goals for 2030, such as for connectivity, skills and digital public services. She further announced that the EU will invest 20% of NextGenerationEU’s budget on digital.

A Vital Europe in a Fragile World

The President called for the revitalisation and reform of the multilateral system, including the UN, WTO and WHO. She pledged that the European Commission will put forward a European Magnitsky act and urged Member States to embrace qualified majority voting on external relations “at least on human rights and sanctions implementation.”

Referring to “new beginnings with old friends”, the President said Europe is ready to build a new transatlantic agenda with the U.S. and to reach a deal with the UK, provided it honours the Withdrawal Agreement, “a matter of law, trust and good faith” on which “we will never backtrack”.

The President pledged an economic recovery package for the Western Balkans and highlighted the importance of Europe’s relationship with Africa: “not just neighbours…but natural partners”.

Finally, President von der Leyen pledges to use Europe’s “diplomatic strength and economic clout to broker agreements that make a difference” on ethical, human rights and environmental issues. She made clear that the EU wants a global agreement on digital taxation, but will go it alone if that cannot be achieved: “I want Europe to be a global advocate for fairness.”

A New Pact on Migration

The President revealed that next week the Commission will put forward its New Pact on Migration, with an approach based on humanity, solidarity and a “clear distinction between those who have the right to stay and those who do not”. She promised that the Commission will “step up and take responsibility” for dealing with the situation after the Moria fire, but: “if we step up, then I expect the Member States to step up…Migration is a European challenge and all of Europe must do its part.”

The President stressed that the Commission will before the end of September adopt its first annual Rule of Law report covering all Member States. President von der Leyen pledged to ensure that EU funds are spent with the rule of law guaranteed.

President von der Leyen announced that the Commission will present a European anti-racism action plan, strengthen racial equality laws and extend the list of EU-level crimes to all forms of hate crime and hate speech, whether based on race, religion gender or sexuality. The Commission will also appoint its first ever anti-racism coordinator. It will put forward a strategy to strengthen LGBTQI rights and will push for mutual recognition of family relations in the EU.

President von der Leyen’s Address is accompanied by a ‘Letter of Intent‘ to European Parliament President David Sassoli and to German Chancellor Angela Merkel, who holds the rotating Council Presidency. The letter sets out a list of initiatives the European Commission intends to bring forward over the coming year.

Commitments during the first year in office

State of the Union 2020 – main initiatives